WASHINGTON, D.C., Aug. 13, 2008 – Dyke Messinger, president of Power Curbers, Inc., of Salisbury, North Carolina and Executive Committee member of the National Association of Manufacturers’ (NAM) Board of Directors, urged President Bush today to increase the exploration and production of domestic sources of energy. 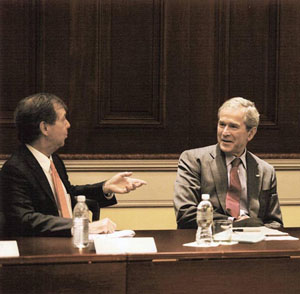 Messinger briefed the President with leaders of the Coalition for Affordable American Energy (CAAE), which includes the NAM. He stated that the U.S. manufacturing sector consumes one-third of all energy in the country—to run plants, offices, research facilities and for use as a critical raw material or “feedstock” to make things. “More than any other sector of the U.S. economy, manufacturing is squeezed between rising costs and the inability to pass those costs on to customers,” Messinger told the President. “Over the past 20 years, prices for U.S.-manufactured goods have increased by a mere 4 percent due to intense international competition, while prices in the rest of the economy have soared by more than 50 percent,” he said.

“While manufacturers can raise productivity and manage costs for the inputs that go into products, they cannot address structural costs — of which energy is the biggest — without strong leadership from elected officials, both in Washington and in the state capitals,” he said.

Mr. Messinger said, “Our nation faces a great challenge, but I am confident that good old fashion American ingenuity will save the day. The solutions will require new investments, new innovations and significant changes in how we consume and conserve energy. More importantly, we need to access our abundant land-based and offshore domestic resources. Our employees are asking us as employers to promote federal policies that tap America’s own energy supplies.

“Investment in and development of reliable domestic sources of energy will be critical to meeting our country’s energy demands in the future and essential to the long-term health of U.S. industry as well as American workers and their families,” Messinger concluded.

The National Association of Manufacturers is the nation’s largest industrial trade association, representing small and large manufacturers in every industrial sector and in all 50 states. Headquartered in Washington, D.C., the NAM has 11 additional offices across the country