Power Curbers, Inc. was formed in 1953 in Salisbury, NC, USA, the home town of one of the founders, to manufacture curb equipment. Today, the company remains true to its roots in curb and gutter, corporate location and family ownership. Power Curbers 5700 Series curb machines lead the world market.

The company is founded by two Salisbury businessmen, John S. Henderson, an engineer, and E.L. Hardin, mayor of the city, to manufacture extruding curb equipment for city streets and for developing the land into subdivisions. The first machine, the 55-A Automatic Extruder, mechanized an otherwise time-consuming, manual process of laying out highway curbs and median islands. It was described as extruding asphalt much like toothpaste is extruded from a tube. Todays Power Curber 150 Extruder is a walk-behind piece of equipment, pouring either asphalt or concrete curb.

The original invention is applied to curb and gutter work. This proves to be a major step for the company.

Richard Messinger, the son-in-law of John Henderson, joins the company as president, concentrating on domestic and international markets and building a dealer network. 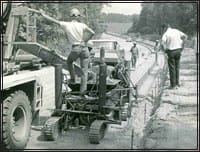 The Curb King Model 6500 is the first slipform machine to pour in the offset position, now an industry standard.

Dyke Messinger, son of Richard Messinger, becomes president and CEO, with concentrations on research and development, customer focus, and diversification.

5700 Series begins, leading Power Curbers to the #1 position in the world in the sale of curb and gutter slipform machines. The 5700 features the hydraulic offset, allowing the machine to maneuver around obstacles quickly. The 5700 Series also slipforms sidewalks, highway safety barrier, bridge parapet, and special applications, such as stadium risers, ditch liners, and concrete paths up to 8 feet (2.44m) wide.

Power Curbers receives a patent for Side Shift Trimmer (4,808,026 www.uspto.com)

Associates link themselves to the mission statement: Our Commitment Shows.

Power Curber machinery is chosen to pave the railbeds in the tunnels for the Eurotunnel project beneath the English Channel between England and France. The machinery slipformed the railbed and sidewalks on the sloped walls of the tunnels. A total of 31 miles (50 km) of railbed and 62 miles (100 km) of sidewalk was completed from France in a record 9 months, as opposed to 17 months of doing the same work by hand from England.

5700-B, with an enclosed auger for better mixing capability and increased productivity, is introduced.

The 5700-B wins a Top 100 New Product Award from Construction Equipment magazine.

Richard Messinger is inducted into the Construction Equipment Hall of Fame.

Quick Connect Mold Mount System is introduced, allowing operators to change molds in a matter of minutes, as opposed to more than 30 minutes by hand.

Power Curbers improves service to customers by establishing regional sales and service managers in states across the country.

The 5700-SUPER-B is introduced, with 50% more horsepower, for faster production.

The 5700-C is introduced, with the capability to pour on either the left or right-hand side and Smart Amp™ controls, giving the machine operator greater flexibility for adjusting the sensitivity.

Corporate headquarters moves to a new manufacturing facility in Salisbury that is geared to customer response. The new facility allows for an intense focus on delivering the utmost value to customers, with manufacturing designed to eliminate waste, drive down lead times and drive up parts delivery. Products are being sold in 80 countries.

The 5700-C-MAX is introduced, with the skeleton of a 5700-C and the inclusion of key options, it is optimized to handle larger applications.

Dyke Messinger is inducted into the Association of Equipment Manufacturers Hall of Fame.

Power Curbers and Power Pavers introduce their largest machines to date. The Power Curber 7700, a 4-track, multipurpose slipform machine designed for a wide variety of offset applications and paving. Also introduced is the Power Paver SF-2404, the first Power Paver model available in a 4-track configuration.

Products are being sold in over 100 countries.

The 5700-D begins production with the SlipSmart Control Solution, the most responsive and accurate system yet. Boasting an enhanced cross-slope control, fine speed scaling, intuitive display, and improved integration with 3D/Stringless control equipment from Topcon, Leica, or Trimble.